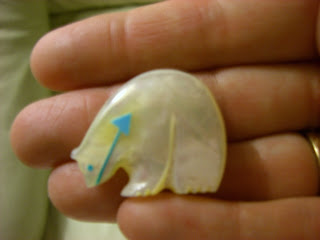 At 5AM this morning, a fetish fell off my windowsill, awakening me from my sleep. A Zuni carved fetish, that is. The Zuni of the southwest carve animals out of stone, bone, antler and such. Each animal is said to have different powers...Ken and I started collecting these fetishes in the early 90s while visiting Santa Fe and Taos one February before we had children. Over the years, we'd give them to each other for gifts. Let's say it was one of those sweet things between couples, less sugary than giving each other stuffed animals but not as formal as a monogrammed bathrobe.

What was perplexing was that there was no way one of these fetishes could just fall off the windowsill all by itself. They are stable where they rest.

So I got out of bed to find that the fetish that had fallen off the windowsill was a white bear. We have three of them. And what do you suppose are the mystical powers possessed by the white bear? Healing, powerful healing. I had once sent a white bear to my friend Pam, who during the same time Ken was going through treatment for Hodgkins Disease, was fighting her own battle against leukemia. Before Pam died she passed her white bear on to Ken.

Since Pam's bear hadn't possessed enough power to keep her alive, I got Ken another whiter bear. Like many fetishes it carried a little bundle on its back wrapped with string. The bundles add even more power. Ken would carry the bear around in his pocket, take it to work, for his chemo treatments, etc. It got so worn from being carried around that the string became frayed and undone. It went through a lot trying to keep Ken healthy but it just wasn't strong enough, so I bought Ken a third white bear...white as snow, smooth as ice. The last bear. This is the bear that fell off the windowsill last night. (OK, so obviously these bears are impostors since two great people died while the bears sat back and did nothing, however, the story continues....)

I couldn't understand how this bear had fallen off the windowsill. As I lay on my bed pondering this I heard a sound of movement throughout the upstairs of our house...something moving through my room, Natalie's room, and Alec's room, around and around. A bird! Or was it a bat? I'm still not quite sure what it was but it was flying around our upstairs going from one room to another.

Normally, any living intruder in our home would be handled by the man of the house, but since that wasn't possible at 5 am this morning, or at any morning in the last many months, it was up to me and my pounding heart. So I waited until the birdy flew into Alec's room, closed the two doors to his room, trapped the bird in there, took a screen off a window, lay down on his bed, and waited for the bird/bat to fly out. I did it!

Afterwards, I felt kind of proud of myself. Kind of strong and capable. A real match for the winged one.

I felt just a little, just a little tiny bit of healing had taken place. With my two little children fast asleep, with no one to help me, I ushered a living creature out of our upstairs with minimal fuss. And I must admit I wonder...what was that flying through each of our rooms last night? A bird? A bat? Or some other flying wonder that came by to check on us?

My only regret? I wish I had at least said "hello." Just in case, you know?
Posted by Jill Schacter at 9:38 PM 1 comment:

Email ThisBlogThis!Share to TwitterShare to FacebookShare to Pinterest
Labels: spirit

Update on Life and Grief

1. Last year I couldn't even plant a vegetable garden. This year I planted tons of stuff, but I haven't tended it so crabgrass is taking over. I'd say this indicates progress. Perhaps next year, I will feel lively enough to weed.

2. The second year is harder. General life viewpoint: Uh-oh, now what. This IS my life. Return to therapy.

3. Women have saved me. If it weren't for all the fabulous women in my life, I'd be buried under the crabgrass in the untended vegetable garden. Thank you wonderful friends and family.

4. I can mow my own lawn, but still not comfortable with changing the gas container on the grill...also haven't cleaned the grill. Perhaps grilling will go the way of the fully tended garden.

6. Everyday I try to think about the good in my life, but I just can't help noticing that big old hole in the center. I will borrow a line or two that Alec (8) wrote in a poem this year: Black is a hole that only ends in darkness. Then again, he also wrote in the same poem: Water is a growing goodness that sees through anything.

Cheers.
Posted by Jill Schacter at 7:01 AM No comments: